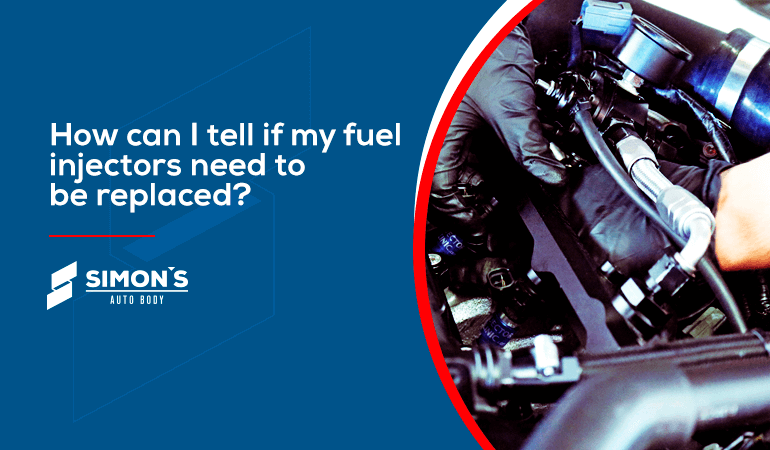 How can I tell if my fuel injectors need to be replaced?

The 1954 Mercedes-Benz 300SL is best known for its dramatic “gull-wing” design, which featured roof-hinged doors. When open, the doors looked like a soaring bird’s wings. But the 300SL also has a more down-to-earth claim to fame. It was the first production car with fuel injection.

This was a new process for getting fuel into the engine, and it was a major landmark in the evolution of modern cars and trucks. Fuel injectors are still a key part of internal combustion engines today. That’s something you can find out in a hurry if they develop a problem. A bad fuel injector can cause serious drivability issues and eventually lead to costly problems.

What Is Fuel Injection?

Let’s start with the basics. The typical internal combustion engine develops power using a four-stroke cycle. As the pistons slide down the cylinders, air and fuel come in. When the pistons rise up again, they compress the fuel-air mixture. The spark plugs ignite that mixture, and the combustion forces the pistons back down the cylinders. When they move upward again, they push out any waste gases into the exhaust system. Because the bottom of the pistons are connected to the crankshaft, the up-and-down motion is converted into rotational energy to spin the wheels.

Before the introduction of fuel injection, most vehicles relied on carburetors for the same job. Carburetors take advantage of physics to get fuel into the cylinders. Without getting too deep into the details, they are engineered so that after the air from the atmosphere enters the carburetor, it passes by a small fuel pipe, sucking up fuel so it sprays in a fine mist into the air stream.

Drivers use in-cabin controls to manually adjust how much air flows into and through the carburetor. When starting a carbureted engine, for example, you want less air. That way, there’s more fuel in the mix, so it’s easier to combust. But it’s less efficient, too. As a result, drivers have to re-adjust the carburetor again for daily driving.

How Can I Tell If My Fuel Injectors Need to be Replaced?

Because fuel injectors are so important for proper engine operation, it can be easy to tell if they’re causing problems. For instance, if they get clogged, they won’t be able to inject enough fuel into the system. The engine can then misfire, hesitate and stall as it’s starved for fuel. And it can be hard to get started in the first place, for the same reason. In any case, both performance and fuel efficiency can suffer. It can take as little as a 10 percent reduction in fuel flow through the injector for you to notice an issue.

More importantly, too little fuel in the mixture can lead to detonation, or “knocking.” The fuel here also has a cooling effect, and without enough, the fuel-air mixture can become so hot that it spontaneously combusts. These uncontrolled, high-powered explosions can cause severe, and expensive, engine damage.

Fuel injectors also can cause problems when they inject too much fuel, whether it’s because they’re stuck open or beginning to develop leaks. Symptoms include sudden engine acceleration, from extra fuel being combusted in the cylinder, as well as issues from unburned fuel. This latter category includes a flooded engine that will have trouble starting. If the leak was extensive, fuel could drip into the crankcase and mix with the engine oil. This would drastically reduce the oil’s effectiveness at keeping the engine lubricated. Needless to say, unburned fuel also poses a bit of a fire hazard. Nor does it smell very good.

Another possible clue for fuel-injector issues is if the “check engine” light comes on. Just remember that a lot of things can do that, from a loose gas cap to a faulty catalytic converter.

Now for some good news. The latest fuel injectors are designed to last a lifetime without needing any extra maintenance. In a perfect world, fuel additives should be taking care of any deposits that can clog injectors. Components from leading manufacturers like Bosch also are backed by limited lifetime warranties. They provide coverage for all “normal conditions of use and service.”

Of course, that doesn’t mean fuel injectors don’t fail. They do, most often because of low-quality fuel. Excess water in the fuel can lead to rust, and that, along with other impurities, can end up obstructing the injectors. That’s why something as simple as filling up at the right gas station can keep your fuel injectors in good condition.